Skip to content
HomeThursday of the Third Week of Advent 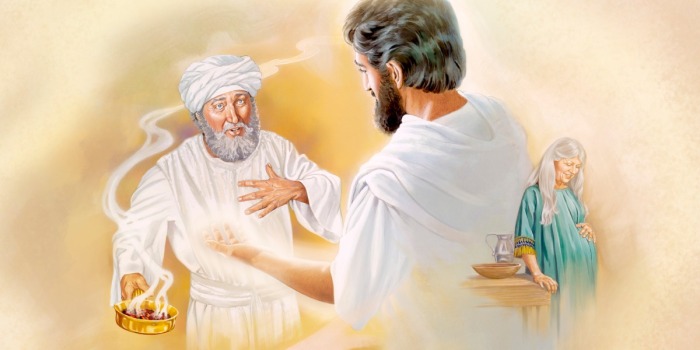 In the days of Herod, King of Judea,
there was a priest named Zechariah
of the priestly division of Abijah;
his wife was from the daughters of Aaron,
and her name was Elizabeth.
Both were righteous in the eyes of God,
observing all the commandments
and ordinances of the Lord blamelessly.
But they had no child, because Elizabeth was barren
and both were advanced in years.

Once when he was serving as priest
in his division’s turn before God,
according to the practice of the priestly service,
he was chosen by lot
to enter the sanctuary of the Lord to burn incense.
Then, when the whole assembly of the people was praying outside
at the hour of the incense offering,
the angel of the Lord appeared to him,
standing at the right of the altar of incense.
Zechariah was troubled by what he saw, and fear came upon him.

But the angel said to him, “Do not be afraid, Zechariah,
because your prayer has been heard.
Your wife Elizabeth will bear you a son,
and you shall name him John.
And you will have joy and gladness,
and many will rejoice at his birth,
for he will be great in the sight of the Lord.
He will drink neither wine nor strong drink.
He will be filled with the Holy Spirit even from his mother’s womb,
and he will turn many of the children of Israel
to the Lord their God.
He will go before him in the spirit and power of Elijah
to turn the hearts of fathers toward children
and the disobedient to the understanding of the righteous,
to prepare a people fit for the Lord.”

Then Zechariah said to the angel,
“How shall I know this?
For I am an old man, and my wife is advanced in years.”
And the angel said to him in reply,
“I am Gabriel, who stand before God.
I was sent to speak to you and to announce to you this good news.
But now you will be speechless and unable to talk
until the day these things take place,
because you did not believe my words,
which will be fulfilled at their proper time.”

Then, when his days of ministry were completed, he went home.

After this time his wife Elizabeth conceived,
and she went into seclusion for five months, saying,
“So has the Lord done for me at a time when he has seen fit
to take away my disgrace before others.”

“You will have joy and gladness, and many will rejoice in his birth, for he will be great before the Lord.”  So the angel Gabriel tells the priest Zechariah when he announces the future birth of the infant who will become John the Baptizer.  Thus, in Luke’s gospel, Gabriel’s announcement of the Christ’s forerunner anticipates Gabriel’s announcement to Mary that she will bear the Son of God.

It’s fitting that this is today’s appointed gospel reading because the spiritual gift celebrated in the third week of Advent is joy.  The Greek word translated as “joy” is χαρά / chara. It comes from the same root that gives us the word “grace.”  So although it’s proper to associate the word “joy” or “rejoice” with a particular feeling or emotion, it ought not simply to be identified with that emotion.  More fundamentally, grace is a state or way of being.  To be in joy or to rejoice is to be graced, given something from God that helps us flourish.  Consequently, it’s entirely possible to be in a state of joy/grace even if we don’t feel particularly happy—yet another reason to beware reducing joy to an emotion.

John the Baptizer is a grace or gift to his aged parents Zechariah and Elizabeth, who until his birth were childless.  That’s why the news of his future arrival is a source of “joy” to Zechariah.  John was also a grace-gift to the people to whom he preached repentance, helping them as he did to move closer to being the people God wanted them to be.  He served on their behalf as a vessel or conduit of God’s grace.

There’s an important lesson for us here.  The ultimate source of grace/joy is, of course, God.  But we live in a sacramental universe in which grace can flow through any number of actions and events.  The seven sacraments are, obviously, conduits of grace.  But we can also be conduits if we attune our will to God’s and purify our intentions.  Like John, although obviously to a lesser degree, we can be vessels that bring rejoicing/grace to others.  God can work through us to help others inch closer to the fulfillment for which God destines them.

Sit quietly for a few moments today giving thanks to all the people in your life who are conduits of grace for you.